Every year more than 650,000 people come home from prison. Within five years of release, 75% will be be back behind bars. Tiltas, an organization dedicated to reducing recidivism, asked me and Kevin (another UXer) to create an app that would help individuals leaving prison transition back into society. My teammate and I delved into the world of returning citizens to deliver designs for a minimum viable product.

Tiffany Smith, founder of Tiltas and human ball of energy, arrived at our kickoff meeting bursting with ideas about how to reduce recidivism. She was tentatively considering a mentorship app - one which paired recently released ex-felons with successfully reintegrated returning citizens - but wanted us to bring a fresh perspective on what the product should be. She asked us to keep several considerations in mind as we got to work.

01. Build an app that facilitates reentry.
Tech use was heavily restricted in prison, so the best point of entry for the product fell at the beginning of an individual’s transition back into society. At this point, the easiest device for most returning citizens to obtain would be a phone. Tiffany’s biggest priorities were scalability and access, hence her focus on a mobile app.

02. Keep it simple.
Most of our users wouldn’t be very familiar with smartphones upon leaving prison. They also had varying levels of literacy and education. Therefore, the app had to be extremely intuitive and easy-to-use.

03. Don’t create a job-matching service.
Tiffany had gone down the path of trying to connect ex-felons to employers before and it wasn’t one she wanted us to revisit. Although finding employment was a proven strategy for preventing recidivism, convincing companies to hire ex-felons was just too difficult.

Like Prison Mike from The Office, I had next to no knowledge of prison and reentry, so there was a lot to learn about the domain and our users before starting to design. Kevin and I spent our first sprint finding answers to several key questions that could inform the direction of our product.

02. What makes the reentry process so difficult?

03. How do returning citizens engage with technology?

04. How is recidivism currently addressed?

With these questions in mind, we dove into research with Tiffany’s help. She facilitated conversations with individuals who had various experiences with prison and reentry.

Halfway house residents
‍Tiffany accompanied us to user interviews at two halfway houses. There, we spoke to groups of returning citizens and learned about the challenges they expected to face upon release. We also gained a deeper understanding of how they used technology.

Halfway house employees
We spoke to a supervisor and an instructor from a halfway house, who shared their perspective on the causes of recidivism. They also gave us a rundown of the technological constraints we had to work under.

Returning citizens who successfully transitioned
Kevin and I met with two graduates of the Cara Program, an organization that provides job training and placement for the formerly incarcerated. They told us stories about the major challenges they overcame during reentry.

After the interviews, we worked on synthesizing the takeaways from our conversations to address our research questions. 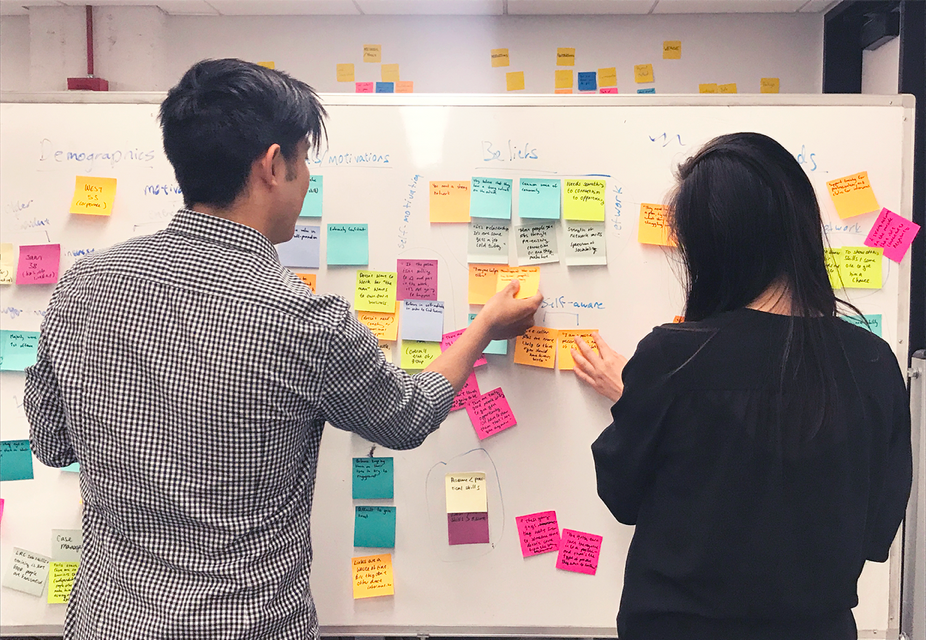 Kevin and I synthesized our findings with the help of an affinity diagram.

Kevin and I identified four major barriers standing in the way of successful reentry.  These barriers made a returning citizen’s transition back into society extremely difficult, reducing morale and raising the chances of recidivism. We decided that our app would address these four key challenges.

As we moved onto ideation, I created five design principles based on our research findings from Sprint One. They served as a reminder to meet returning citizens’ needs for trust, guidance, and support while we brainstormed concepts for the app.

I also conducted a competitive analysis to find additional inspiration, looking at how other organizations and products were addressing key barriers to reentry. We wanted our digital tool to address both the job search and the support/training that could help returning citizens get back on their feet.

With our competitive analysis and design principles to guide us, we brainstormed and ended up creating seven concepts. We designed according to Android specifications, since most returning citizens were Android users. With our prototypes in hand, we headed to the North Lawndale Employment Network and tested our ideas with seven returning citizens in the middle of their job hunt process.

This discussion forum allowed returning citizens to support each other through the job search and post success stories. Most testers didn’t understand the purpose of this concept or how it would be beneficial.

This concept allowed users to find other returning citizens in their area in order to share tips for finding employment. Users either didn’t understand these networks or saw other members as competition for the same jobs.

This map indicated locations of felon-friendly jobs and chances of getting hired. Users couldn’t understand the point of the map, but they really appreciated being able to see their chances of employment as an ex-felon. We decided to include this aspect moving forward.

This concept showed locations of helpful resources, such as temp agencies, donation centers, and reentry programs. While users liked knowing where to find these they didn’t see how this concept was any different from Google Maps. We decided to include resources, but not in this format.

Inspired by Facebook, a popular site for connection, this concept provided forums to discuss various topics of interest for returning citizens. Many testers thought this was the most helpful concept, as it gave them access to information that could help them find employment.

Although traditional mentorship was seen as burdensome, this concept re-framed it in terms of the job search. Testers trusted a fellow returning citizen to give good advice and felt hopeful about achieving similar success in their job hunt.

Since a big frustration amongst returning citizens was the lack of visibility into felon-friendliness on traditional job boards, this concept consolidated listings from employers who were known to be felon-friendly. Users felt this was more straightforward than Indeed and LinkedIn.

Iterating On Our Ideas

Keeping our testers' feedback in mind, we created a converged prototype for Tiltas by modifying and combining features that our users found helpful.

REfinements to Our Design

Our plan was to refine the prototype after conducting at least five usability tests, but we were only able to recruit three people. All of our testers had successfully reintegrated into society a while back, so the data we collected wasn't from our target audience: recently released ex-felons.

However, the feedback we did receive on our concepts and final prototype was pretty positive overall. Cortez, a staff member at the NLEN, even called us to express how excited our testers were about the product we were designing for Tiltas.

As we weren't able to validate our design with enough users during our final sprint, Kevin and I left Tiffany with a prototype of the app and several recommendations for further testing.

We created this final prototype in InVision and handed it off to Tiffany with several recommendations.

01. Concept test features on the Profile tab.
During our final round of testing, two people enjoyed the counter and the checklist. One didn't understand them. None of these testers were recently released returning citizens, our main user base. Since the data was inconclusive, we recommended validating these features with 5-6 individuals who fell into our target market.

02. Usability test with 5-6 potential users.
No clearly defined patterns emerged during our three usability tests, so we encouraged Tiffany to conduct several more before handing the prototype and wireframes off for development.

We also created annotated wireframes to complete our designs for a minimum viable product.

We built out additional screens and empty states, and wrote wrote annotations, providing context for Tiffany's developer and any designers who would work on her project in the future.

Tiffany was excited. We had narrowed down her scope, delivered designs for a minimum viable product, and provided recommendations for moving forward. After we wrapped up our final sprint, she used our wireframes to work with a UI team to continue bringing the product to life. 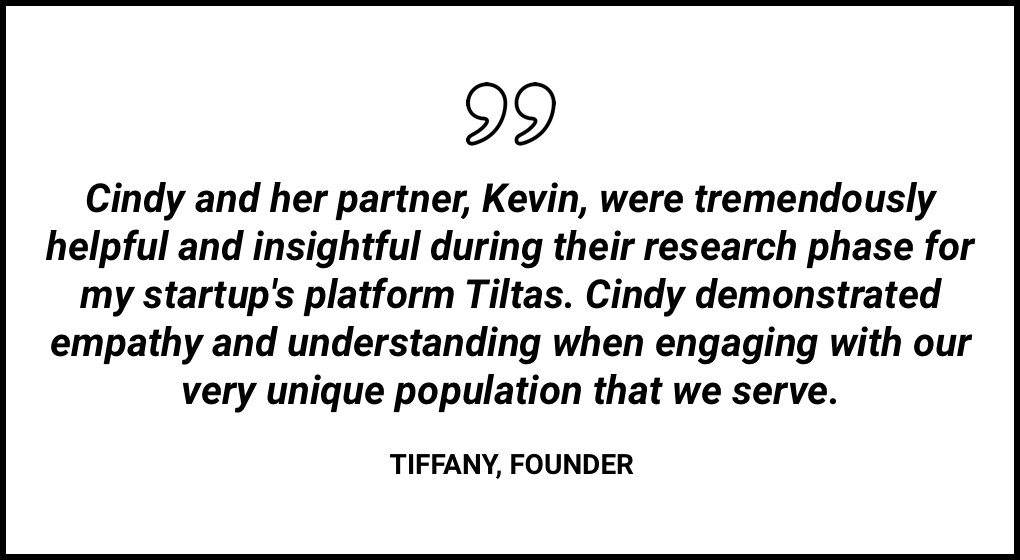 I came into this project feeling incredibly nervous. I had never spoken to anyone who went to prison before and I had no idea how to design for someone who wasn't familiar with modern technology. Thanks to Tiffany, Kevin, and all of the returning citizens who helped us with this project, I was able to gain a deeper understanding of recidivism and see how design could be used for positive change. If I had the opportunity to continue working on this product, I would:

01. Design the job coach's side of the app.
Since the job coach would be a key figure during reentry, I want to design various tools that could help him or her facilitate returning citizens' journeys back into society.

02. Test, rewrite, and refine the language.
Although I paid special attention to writing clear and simple copy for our product, I wish I spent more time testing it. Then, I could explore more ways to foster trust and accessibility through language.

03. Test the product with more users.
Working closely with Tiffany allowed me to see how much she cared about this product and the people we were developing it for. To make Tiltas' app the best it can be, I want to validate our designs with more recently released returning citizens.

Get In Touch
Email Me
Let's Connect!
LinkedIn
Designed By
© Cindy Wang